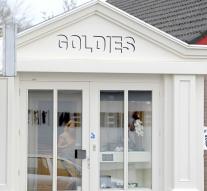 - When it comes to justice is the third perpetrator of the fatal everywhere at a jewelry store in Deurne three years in jail. The man was admittedly not directly involved in the action, in which two attackers were killed, but it has made such a contribution to the crime that can be proved complicity, the Advocate General argued Friday the sentencing.

The 28-year-old man was in the first instance also sentenced to three years in prison but appealed this.

The raid on jeweler Goldies in Deurne on March 28, 2014 caused quite a stir. The two robbers in the store got into a fight with the owner of the case. His wife eventually shot dead the two perpetrators.