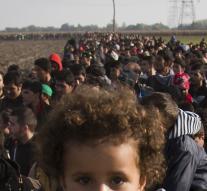 brussels - In Greece, this year 50000 childcare places created for refugees. Further along the Balkan route, along which migrants travel to richer European countries, there will be another 50000.

That agreement is the most concrete result of the summit in Brussels on the refugee crisis. " That should provide peace and streamlining the flow that goes to Germany ", said Minister Klaas Dijkhoff (Asylum and Migration) Sunday night meetings after eight hours.

The European Commission had eleven leaders invited to Brussels in an attempt to make coordinated movements of refugees in south-eastern Europe expired. They got a plan of seventeen points match. One is that every country designates an officer to quickly exchange current information with other countries.

Countries that think the influx not be able to, must within 24 hours to ask for help, it was agreed. " A policy of passing refugees without informing the neighboring country is not acceptable ", is in the final text that signed the leaders.

Furthermore, Slovenia, which had asked for help, assisted with emergency aid and four hundred police officers. Slovenian Prime Minister Miro Cerar had previously said on the night when deteriorating collaborated " the European Union is falling apart ".

Not only the borders between Greece, Albania and Macedonia to be better monitored, there will also be more surveillance along the Greek coast. In addition, the countries pledged to seriously get started with the registration of refugees. " People need to be registered. No registration, no rights ", said President of the European Commission, Jean-Claude Juncker, who had convened the leaders.

Dike Hoff spoke of an evening with " ups and downs ". As a bonus, he mentioned that now " countries have drawn on board who are not in the European Union are ", referring to include Albania, Serbia, Macedonia and Montenegro. Many countries along the route to see themselves primarily as a transit country, says Dijk Hoff. He pointed out that there is a greater interest lies in agreements with a country like Turkey.

German Chancellor Angela Merkel expressed realistic. " This is a building block, but we need to take many further steps. "