Home / World / Zutphen does not come out of the paint 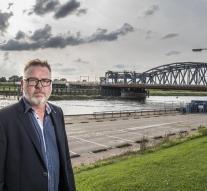 zutphen - A bridge that is only half-painted because it's money up. Politician Hans Boersbroek can not help with his head. 'The Oude IJsselbrug is the business card for our Zutphen. But this way, of course, it's not entirely painted. '

The bridge has been thoroughly taken over the past few months. But after the job was cleared, the Zutphenians came to the discovery that the Oude IJsselbrug now consists of two colors.

It's raining in the meanwhile jokes. Such as Zutphen runs a blue. 'We really hit a huge flater,' said Boersbroek, who denounced the issue yesterday in behalf of Zutphen City Party in written questions.

Previously, the beige was beige with orange, but it was decided to paint only the orange section in blue, Zutphen's home color. 'Literally half work', Boersbroek breaks.

What city mate Remy Koppel started a fun action. 'Via Facebook I made a call. To dye a group of volunteers 'history.' I needed 100 people, in the shortest time 80 enthusiasts reported. '

But that was a bridge too far for the municipality. 'Of course, we can never guarantee the safety of all those people,' says Liesbethe, Witsenburg's provincial leader. She explains that it was deliberately decided to paint the bridge only for half. The beige paintwork is still alright. 'And painting everything would cost 2.5 tons extra. Hence this solution. Meanwhile, we have understood that this is a hot issue in our city. Something we're incredibly sorry about. That's why the college of B and W will discuss this situation again next Tuesday. '

The City Party demands clarification. Group chairman Boersbroek: 'If we want to paint the rest of the bridge in a few years, everything has to be scaled back. And the bridge must be closed again for a while. What will that cost? At that time a large amount of money was paid for a color architect who came with that weird color orange, all of which thought it was a primer. And then think that the municipality wants to extract just five tonnes these days to renovate the town hall permanently. I especially hope that this lavish performance will be put to an end first.. '