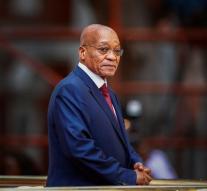 johannesburg - The presidency of Jacob Zuma is marked by scandals, but he knows how to survive over again. But now the situation seems very dire, now the ANC decides whether he can keep the South African president.

The credibility of Zuma was seriously compromised in April when the highest court in South Africa ruled that he had violated the constitution. Zuma spent for the renovation of his house 14.7 million from the state treasury, on paper for additional security. Which were found to consist include a swimming pool, an amphitheater and a cattle shed.

The 74-year-old president is polygamous, in accordance with the tradition of his Zulu Nation. He was married six times and still has four wives and 21 children. He is known for his adulterous behavior. During the election campaign he was accused of rape in 2009. He was then acquitted, but allegations of corruption Zuma can not shake.

Zuma denies having laundered money or racketeering stops after. Those charges came after a controversial arms deal in 1999, which converted 4.7 billion was involved. The South African public prosecutor withdrew the charges a few weeks before Zuma became president in. The opposition is still struggling to undo that decision.

The president later joined as a teenager to convicted by the armed wing of the ANC and was to ten years in prison because he would have carried subversive activities. He was stuck on Robben Island as Nelson Mandela. After his release he left the country and lived in Mozambique and Zambia as he rose within the ranks of the ANC. When the ban on the ANC was lifted in 1990, he was one of the first to return.

Jacob Zuma praised for one merit: it has radically altered the AIDS policy of the country, after his predecessor Mbeki had always maintained that there was no link between HIV and AIDS. Zuma has lifesaving drugs made available to everyone. South Africa has an estimated five million people infected with HIV, more than anywhere else in the world.