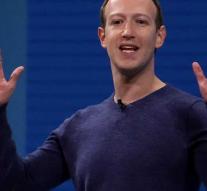 san jose - Facebook is working on a feature that allows users to clear the browser history on the social network. Topman Mark Zuckerberg from Facebook said the new system will be discussed at the annual Facebook conference that starts Tuesday.

Zuckerberg said he wants to make it easier for Facebook users with the 'clear history' function to delete the list of visited websites.

Facebook came under attack after it became known that the British data company Cambridge Analytica misused information from tens of millions of Facebook users, including for the election campaign of President Donald Trump.

Following the scandal, Zuckerberg has promised to improve the privacy of users.