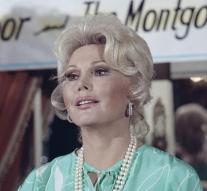 - The legendary Hungarian actress Zsa Zsa Gabor's Sunday at the age of 99 deceased of a heart attack. In recent years faced a lot of health problems.

According to TMZ, there is hurriedly tried to bring her to the hospital, but there she declares dead.

Her husband Frederic Prinz von Anhalt tried to organize in recent years in vain for Gabor birthday, but she was too ill several times to receive visitors.

Zsa Zsa and her sister Eva were decades of familiar faces in Beverly Hills. She has been married from 1942 to 1947 by Conrad Hilton, grandfather of Paris Hilton.

The actress would have turned 100 years old in February.