Home / World / Zimbabwe can not argue 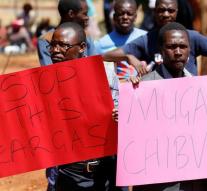 The dissatisfaction with Mugabe has recently increased significantly. The country's economy has totally collapsed, with large deficits to include food and money and massive unemployment as a result. Last Friday, police dropped tear gas as hundreds of protesters and opposition leaders took to the streets.