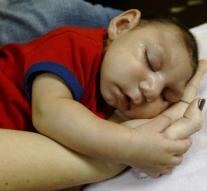 - It takes up to two to three years before the zika epidemic in Latin America is over. By that time, many people have been already sick and thus become immune. Then there are too few survivors in order to maintain the large-scale distribution. The epidemic extinguishes itself, say British scientists Thursday.

The researchers compared the current epidemic with the earlier spread of diseases like dengue and chikungunya. They predict the spread of the zikavirus will expire. In the course of next year, the number zika cases have dropped significantly already. And if the current epidemic is over, it will probably take at least ten years before there is another outbreak, they think.


It has little sense according to scientists more to combat the outbreak, for example, by an action against the mosquitoes that infect people.,, That should have happened much earlier. By the time we realized how big the problem was, it was too late. '' In addition, it can work just the opposite.,, If we slow the spread, it takes longer before we reach the number of immune people needed to stop transmission. ''

The approaching end of the zika epidemic makes it difficult to develop a vaccine.,, By the time that the vaccines are ready to be tested, there are more cases may not be enough in order to test whether the vaccine is working. ''