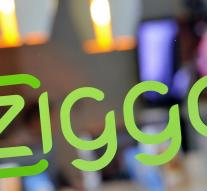 - Ziggo has another quarter of lost customers, although less than in the previous period. This is partly due to a price increase on 1 July was implemented for UPC, the rival to the company after the acquisition by Liberty Global merged last year.

Ziggo counted late September a small 9.78 million subscribers. That's a net 18 000 less than the previous quarter. In the three months before the said tariff increase Ziggo hit by fierce competition in the Dutch market 87. 000 customers lost.

The Dutch branch of Liberty Global was therefore significantly out of step with its sister companies elsewhere in Europe. Countries such as Germany, the UK and Belgium together accounted for the lion's share of the customer growth of the originally American company, which on balance 320 000 subscribers plastic slip.

Liberty Global reported Friday for the third quarter sales totaling $ 4.6 billion (4.2 billion euros), which on a comparable basis, representing a growth of 3.7 percent. In the Netherlands there was a revenue decline of 2.1 percent, while average revenue per subscriber rose slightly.