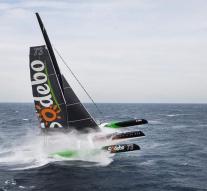 paris - Frenchman Thomas Coville on Sunday a new world record by just sail around the world in just over 49 days. Coville crossed the finish line Sunday at the Quessant island off the coast of Brittany, French media reported.

The Frenchman took eight days shorter than on the previous record was held by Francis Joyon since 2008, another Frenchman. Coville was on November 6 in a 31-meter trimaran left from Brittany. It took 49 days, 3 hours, 7 minutes and 38 seconds to complete the globe.