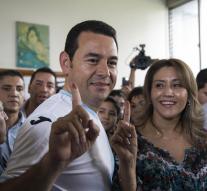 - At the second and final round of presidential elections in the Central American Guatemala is showing signs of a clear victory for the popular TV comedian Jimmy Morales. The candidate of the nationalist party FCN state after counting more than half of the votes more than 74 percent of voters.

There he is well ahead of his pursuer, Sandra Torres of the Social Democratic Party UNE. The former first lady is on tight 26 percent of the vote.

The first round, on September 6, was also won by Morales. Political newcomer benefits from the ongoing bickering of the candidates of the other traditional party. In his favor is also the lingering corruption scandal among the political elite. Former President Otto Pérez and his place replacement Roxana Baletti sit for a donation in prison.