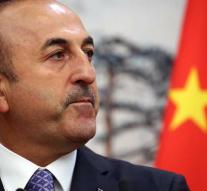 istanbul - Kurdish Syrians from the YPG militia will start from July 4 with the departure from Manbij in the north of Syria. The Turkish Foreign Minister Mevlut Cavusoglu declared Thursday. The withdrawal takes place according to a plan that Turkey and the US have made.

Ankara wants to reduce the YPG, which dominates large parts of northern Syria. Turkey regards YPG as an extension of the banned PKK. The US, however, supports the Kurdish fighters.

To prevent a violent confrontation between the Turkish army and the YPG, the departure plan has been forged.