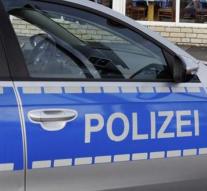 - In a stabbing at the central station of Frankfurt Hauptwache at least four young people have been injured. Those aged between sixteen and eighteen were arguing Saturday which was also stabbed. A boy of eighteen was lightly wounded, three young boys were seriously injured.

Because it was very busy at the station, many people have seen the stabbing. The German police has already interrogated witnesses, but the cause is still unknown.

Because of the research station was temporarily closed in Frankfurt. Police are still looking for others involved in the stabbing.

The four wounded guys are admitted to the hospital.