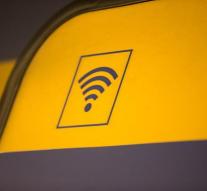 the hague - Half of the Internet users even use a public, unprotected Wi-Fi network. Young people do it the most often and take the least account of the risks, such as privacy violations. That is what the CBS reports on Friday.

Users of Wi-Fi networks that are not protected by a username and password risk others to view their data. Seven out of ten interneting 18- to 25-year-olds use such networks, and one in ten interneting 75-plus.

Of those who ever connect to unsecured, public Wi-Fi networks, 34 percent say that's limited because of security concerns. They do so by renouncing Wi-Fi usage or by signing in to a secure network, if possible. A quarter of the youth and just over half of the 65-plus limitations limit the use because of the risks.

Four out of ten users of public, unsecured Wi-Fi networks are always aware of what they do and do on such a network.