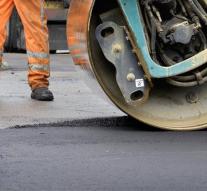 - The residents of the street Auf 'm Rott in Dusseldorf of the municipality got the bill for paving. Not just a contribution, because the bill went back to 1937 when it was applied the so-called Hitler-asphalt Auf him Rott.

Most residents had to pay about 10 000, but who occasionally was applied an extra coat at the door, the requested amount rose to as much as 20 thousand. The residents went to court because it was much too much for a contribution to an eighty year old pavement.

The judge sympathized with the plaintiffs, but the city of Düsseldorf is in the right. There is a compromise came out on top, making notes on average be reduced by about 3,000 euros.