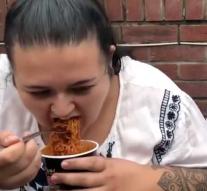 manchester - A 20-year-old woman from the English city of Manchester ended up in hospital after she ventured into an extremely tough noodle challenge. One day after she threw back the 'Samyang hot chicken noodle soup', she had blood on her stool. In the hospital, the young woman appeared to have Crohn's disease.

Shannen participated in the challenge together with a friend. Immediately after eating the extremely spicy noodles, she suffered from painful stitches in her stomach. 'Later that day I went to the toilet and all I saw was blood,' she tells Mirror.

The next day the 20-year-old 'vlogster' went to the hospital. There she appeared to have Crohn's disease. In Crohn's disease there is inflammation in the intestines and the digestive tract. This can lead to abdominal pain, fever, diarrhea, fatigue and blood loss.

The doctors have warned her not to eat such spicy foods again in the future, but Shannen does not care. 'I still eat peppers every day. '