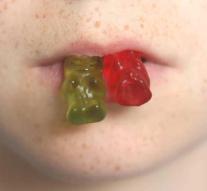 cleveland - At least eleven pupils arrived in the hospital in the US after eating gummy bears that contained marijuana. According to US media Tuesday the students between 5 and 9 years old were...

The incident took place at a primary school in Cleveland, Ohio. Altogether, fourteen students from the bears had snooped. Some parents refused to give their children to the emergency services.

The incident, according to US media may be due to the looser way American States dealing with marijuana and snacks with drugs that resemble real sweets.