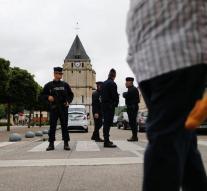 - Sixteen-year-old boy was arrested Tuesday in connection with the hostage in the church of Saint-Étienne-du-Rouvray, probably has nothing to do with the action. The boy born in Algeria was not long after the kidnapping arrested by the police.

Minister Bernard Cazeneuve of the Interior in France said Wednesday it will spend the next few hours answer about the possible share of the boy. The Algerian is the younger brother of a man who is wanted internationally.

During the kidnapping the priest (86) was killed in the church, a second man was seriously injured. The two kidnappers were slain by a police command. One has been identified as the nineteen-year-old Adel Kermische.