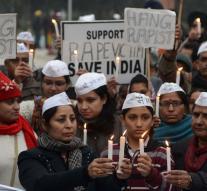 - In the Indian capital New Delhi two young children were raped . A girl of 2.5 years was near her home in western New Delhi kidnapped and raped by two men. A girl of five years by two drunken men , acquaintances of the family , taken away and raped .

The girl of 2.5 years was two hours after her disappearance maimed found behind a bush in a nearby jungle.

The girl of five is not far from her home dropped by the two offenders. She walked himself home and told her parents about the rape.

People from the area have identified the two men and beaten up. The police have arrested the duo. The Delhi Commission for Women ( DCW ) was shocked by the news.