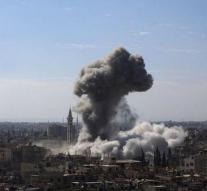 damascus - A young girl has blown herself Friday in a police station in the Syrian capital Damascus. An eyewitness told Reuters news agency that the child walked into the office and asked if she could go to the bathroom. This was followed by a powerful explosion.

According to Syrian state television the girl was only nine years. Which extremists have encouraged her to action is not known. The Syrian Observatory for Human Rights reported to have received reports of other victims, but the number is still unknown.