Home / World / Young and old are fed up with China 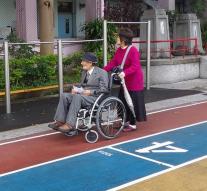 
The islanders thus choose a new future, one that especially less dependent on China, which regards Taiwan as a renegade province and envisages a future reunification.
The campaign by the DPP was not in any way comparable to those of the Kuomintang. The atmosphere at the Democrats was relaxed, festive, full of confidence, and above all very modern.
That put it another shrill campaign to square one. The way the pro-Chinese party tried to attract voters was deadly dull, conservative, actually downright corny. Especially younger voters, who are already little ophadden with the government of President Ma Ying-jeou, were therefore driven away definitively.
But many older people feel abandoned by Ma and his cronies. So they voted en masse for a fresh, new wind. The first exit polls indicated that Tsai had received more than 58 percent of the vote.
Much to the delight of Hwang Jung-hua, who was with his 92 year eager to vote for Tsai. 'And that everyone should know,' shouted the senior overjoyed at the Taipei Municipal Ximen Elementary School, which was used as a polling station.
NEW