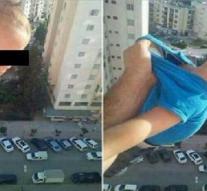 algiers - A man who bumped a baby from the window on the fifteenth floor of a building in Algiers, got two years of imprisonment. On Facebook, the man placed a picture of the baby who came out of the window with the text: '1000 likes or I let him fall.'

Many Facebook users had complained about the man's action. The photo received thousands of negative comments.

Sunday, the man, a family member of the baby, was arrested. A court in Algeria sentenced the man on Monday, according to Al Arabiya.

The father of the child said in court that the man was playing a game. According to the man, the conscious photo on Facebook was adapted by other users. There would be sheltered handrails on the balcony.

According to the judge, the life of the child has indeed been jeopardized. That is why the man has to enter the cell for two years.