Home / World / You drive 40 years without a motorcycle license 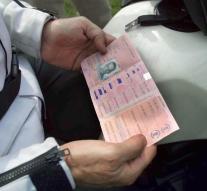 nijmegen - A 56-year-old Nijmegener appears to have been driving forty years without a motorcycle license. The man was caught when he was on a motorcycle on the way to the riding school where he would get his last motorcycle ride. On Wednesday he would actually have driving exam. The police have taken his license.

The man told the police that he accepted the consequences and that this should happen once more. The judge decides what the amount of the fine is and when the Nijmegen returns his license.