Home / World / Yosemite park closed due to many rainfall 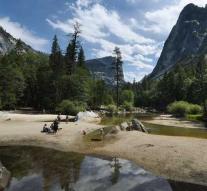 san francisco - The famous Yosemite nature park in the US state of California is temporarily closed due to the threat of flooding due to heavy rainfall. Campsites and accommodations in the valley of the Yosemite Valley will remain closed on Friday and during the weekend.

The meteorological service of California has issued a warning for flooding. The precipitation can also lead to the melting of the snow in the Sierra Nevada mountains.

Heavy rainfall caused deadly landslides in Southern California in January. 21 people lost their lives in various mud avalanches. Earlier in the affected region large forest and forest fires had raged and there were landslides.

The Yosemite Valley National Park is known for its steep granite walls and waterfalls and attracts more than three million visitors annually.