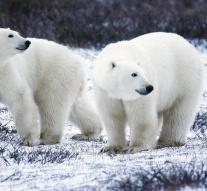 - "A besieged by Russian polar remote station is dismayed Wednesday. The rescue operation was launched on a Russian research ship in the Arctic, where some of the crew with a helicopter flew a kind of fireworks to the remote station. This fireworks crew members along with the weather and women chased polar bears, reported the news agency TASS."

"The five meteorologists in the weather station on the island Trojnoj had previously beaten in the Kara Sea alarm about their plight. They ventured through all the bears no longer around outside. Initially they received little response to their cry. The authorities in Arkhangelsk said early this week actually that they had to fend for themselves and that there would be a supply vessel over a month. Meanwhile, all hung over ten adult polar bears around the weather station."