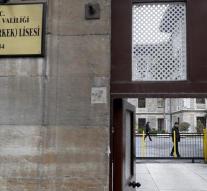 istanbul - The Christmas may be processed in the classes of the German-Turkish elite school Instanbul Lisesi. This was announced by the Turkish school and the German section of the school after a joint meeting Monday.

Earlier, the German teachers were in high school in Istanbul gotten the notice by e-mail that they should not pay attention to the Christian party in the lessons. When that was announced Sunday, the Turkish school then denied there was a ban on Christmas.

In high school Istanbul Lisesi work 35 German teachers who are paid by the Federal Republic. The traditional elite school is only visited by Turkish students and is a recognized German school abroad. The German staff has its own department head, but the Turkish school has the last word.