Home / World / Yet 'Brussels' one victim in hospital 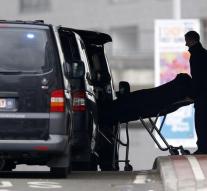 brussels - Nearly 4.5 months after the attacks in Brussels is one more victim in a Belgian hospital. That left Maggie De Block Minister of Health on Friday knowing.

The attacks of March 22 at the airport in Zaventem and in a subway station in the Belgian capital cost 32 human lives in addition to three terrorists blew up. There were more than 300 injured.

Among the deceased victims were fifteen foreigners, of whom twelve were repatriated to their country of origin, according to the minister. Seven were returned to the United States, two in France and one to Colombia, Israel and Germany.