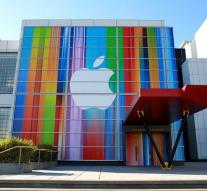 - Apple still seems to always be working on developing a self-driving car. The tech giant namely last week sent a letter to the National Highway Traffic Safety Administration which stated inter alia that '' new entrants' have the same testing capabilities on public roads as' existing manufacturers'.

Apple also states that the sharing of data is crucial for the accelerated development of the industry, but would that do with maintaining the privacy of its customers. That is in line with the attitude that Apple has taken in recent years in its iPhones and iPads. Further indicates Apple's director of product integrity Steve Kenner, who signed the letter, that Apple uses machine learning. This self-learning systems to make products smarter and more personal, but according to the company also mean a lot in the field of transport.

Going there for years rumors that Apple is developing a self-driving car. It is also clear that the company has attracted several workers which originate from the traditional automotive industry, but also, for example Tesla. In early September, The New York Times reported, however, that Apple would have reduced the project and would like to concentrate more on the technique of self-propelled vehicles rather than developing a car.