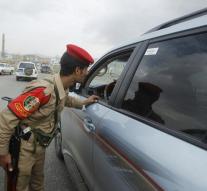 sanaa - Two Americans who were held captive in Yemen were released Saturday and moved to Muscat in neighboring Oman. Has announced that Omani state media.

The state of Oman showed images of the two Americans who left the aircraft of the Air Force of Oman. The US Department of State expressed his gratitude to the Government of Oman for facilitating the release and called the release a humanitarian gesture by the Houthis, the rebel group that seized power in the Yemeni capital Sanaa.

A representative of the Ministry of Foreign Affairs announced that Oman had cooperated with the authorities in Sanaa to free the Americans. A spokesman for the Houthi rebels confirmed the departure of the Americans from Sanaa.