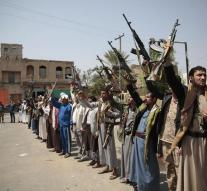 - Yemeni Houthi rebels on Tuesday grenades fired in an industrial area on the Saudi side of the border. Seven civilians were killed, report the Saudi state.

The victims in the border city of Najran, four Saudis and three foreign workers. The Houthis store rarely so bloody far on Saudi territory.

Sunni allies of the Yemeni government, led by Saudi Arabia, the Houthis meanwhile continue bombarding from the air. An airstrike on a house in Nehm, just east of the capital Sanaa, took earlier in the day a family of nine persons life, report local residents.


The pro-government alliance bombed Monday a hospital of Doctors Without Borders. Tuesday succumbed under the charity another three victims of the air strike, bringing the death toll to fourteen.