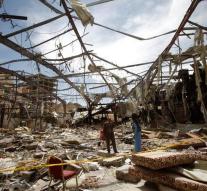 sanaa - President Abd-Rabbu Mansour of Yemen has agreed to a cease-fire of 72 hours with the possibility of an extension. The United States, Britain and the United Nations had suggested a truce.

Foreign Minister Abdel-Malek al-Mekhlafi said Monday that Mansour wants there is a military commission that monitors the ceasefire. US Secretary of State John Kerry said earlier that the parties can take place during a cease-fire under UN leadership at the negotiating table to discuss peace.

The civil war in Yemen began in March 2015. Shiite Houthis rebelled against the Sunni government. They currently occupy large tracts of land in the north, including the capital Sanaa. The war has cost about 10 000 lives.

The rebellious Houthis have not yet responded.