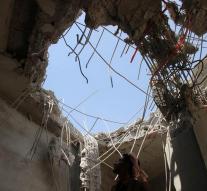 sanaa - Least 21 civilians, according to local sources Saturday killed in air strikes in Yemen. Battle Gears would have opened fire by mistake on workers who were drilling north of capital Sanaa to water.

At least four civilians were killed in the first airstrike in the district of Arhab. According to local residents saw pilots of the international coalition led by Saudi Arabia, the drilling equipment suspected of being a rocket launcher.

The fighters opened fire again when neighbors rushed to help. Addition, there were eleven people dead. In an air strike on the home of a tribal leader in another part of the country would be another six civilian deaths.Cat rescued after 16 days under rubble"

It is not the first time that civilian targets were attacked in Yemen. MSF said last month managed to leave the north of the country after a hospital of charity was bombed by the coalition put forward by Saudi Arabia. Who fights in Yemen against Houthi rebels.