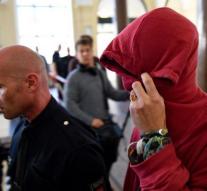 hamburg - A 21-year-old Dutchman was convicted in Germany for two years and seven months of imprisonment for his share in riots in Hamburg in early July.

According to the judge, he was guilty of serious abuse by throwing bottles to police officers. He also resigned during his arrest.

According to the German broadcaster NDR, the Dutchman was involved in bringing the courtroom. There he could count on the loud noise of the audience.

The Dutchman has been in forearm since 7 July. He did not speak a word during the treatment of his case.