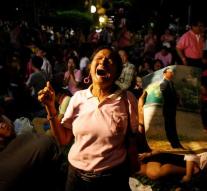 bangkok - The Thai government because of the death of King Bhumibol declared a mourning period of one year for all civil servants in the country. The entire population was asked to forgo the next thirty days of festivities.

Bhumibol died Thursday at the age of 88. The mourning period begins Friday. Flags on government buildings and schools are half-mast for the next thirty days.