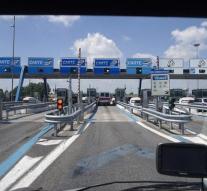 mâcon - Much tough driving in France is immediately severely punished. A man who was blasted in the department of Côte-d'Or on Sunday with 163 kilometers, received a year's cell yesterday.

The Belg could not be arrested after a hundred kilometers of chase. Eventually he was held standing in the department of Saône-et-Loire. The 21-year-old driver reached peak speeds of 230 kilometers, according to Het Nieuwsblad.

The driver's driver who was also in the car was sentenced to seven months.

The mother and niece of the man who were in the car were not prosecuted.