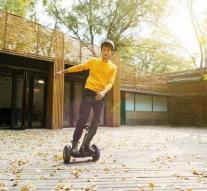 - Chinese phone maker Xiaomi was already renowned for his excursions into other genres gadget , but now it has a very special device launched. It is the Ninebot Mini , a small electric transport that resembles a small version of the Segway.

The Ninebot Mini is a product of Ninebot which Xiaomi is a major shareholder. Also this Chinese company earlier this year the US Segway, the original inventor of this type of vehicle was acquired.

The gadget itself is 16km per hour, can be up to 22km on a single charge and can drive up to 15 degrees steep drive up hills. With an accompanying smartphone to keep track how fast and how far ridden.

So far the Ninebot Mini resembles the Oxboard earlier this year in the Netherlands came on the market. However, it is a lot cheaper with a suggested retail price of the equivalent of approximately € 280.