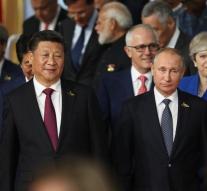 hamburg - China and Russia are opposed to drawing up a sanction list by the United Nations for individual smugglers. That's what EU officials say after a night about the final statement released by the G20 countries in Hamburg on Saturday afternoon.

President Vladimir Putin and his Chinese ambassador Xi Jinping are willing to endorse the 'need' to fight human trafficking, according to EU sources. For an international UN list, the assent of the Security Council is necessary. In Hamburg, all the leaders of the five permanent members are present: the US, China, Russia, the United Kingdom and France.

EU President Donald Tusk had proposed the UN list as a means of combating smugglers' ruthlessly. 'A concrete measure like this is the least we can do at international level,' he said Friday. The sanctions can help break the business model of smugglers. Their funds will then be frozen and a travel ban can be set against them. Tusk called leaders who would not want to cooperate Friday, 'hypocrite'.