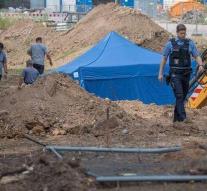 frankfurt - German explosion experts have successfully demolished a bomb from the Second World War in Frankfurt. Before the work started on the bomb, a large part of the city was evacuated. It went with 60,000 inhabitants for the greatest evacuation in decades in Germany.

Patients from two hospitals and residents of ten retirement homes were also accommodated elsewhere. Public transport was almost flat all day and the airspace was partially closed.

The blindman was found on Tuesday during construction work in the Frankfurt-Westend district, just outside the city center. According to Bild, it was a 1800 kilogram heavy British Blockbuster-type HC-4000 with 1400 kilograms of explosive.