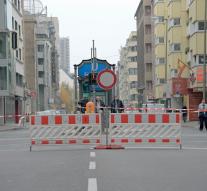 - The German bomb squad on Sunday in Berlin's Kreuzberg district defused a bomb from World War II. The bomexperts managed to remove two fuses from the American bomb.

The bomb of 250 kilos was found Friday during construction. Around 11000 people had to the district because of defusing the explosive temporarily from their home.

In Koblenz, about 470 kilometers from Berlin, Sunday 5,000 people were evacuated. Here an American bomb of 250 kilos was also found when working at a primary school. It is not yet known whether the interference with the bomb has already been completed.