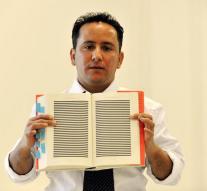 - The United States has released the 45-year-old Mohamedou Ould Slahi from the prison Guantanamo in Cuba. The Moor has returned to his homeland. Slahi was announced by the diary that he kept in prison for terrorists.

Slahi was more than a decade stuck in Guantanamo. He studied electrical engineering earlier in Duisburg, Germany. He ran after the attack of September 11, 2001 in US captivity. US accused him among other things of membership of al Qaeda. During his imprisonment he wrote in his diary including on torture at Guantanamo. It appeared in 2015 under the title Guantanamo Diary in censored form. The book became a bestseller.

Americans now hold sixty men at Guantanamo, according to the Department of Defense in Washington Monday.