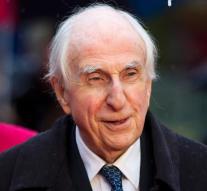 london - Michael Bond, the author of the books about Beertje Paddington, died at the age of 91.

That reports his publisher Wednesday.

Bond was known by all the stories about Paddington, a brown bear sent from South America to Great Britain and found by a family on the same metro station.

The first book about the famous bear appeared in 1958. In 2015 Bond wrote his last story about Paddington: Love From Paddington. In total, about 35 million books were sold on the bear.