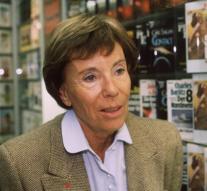 - The French feminist writer Benoîte Groult is deceased at the age of 96. That has notified her family Tuesday, reports Le Monde.

Groult debuted in 1962 with the written along with her four years younger sister Flora Journal à quatre mains (Journal for four hands), followed by Le féminin pluriel and Il était deux fois. Her first novel, La part des choses (Life as it is) appeared in 1972 and was about the relationships between men and women.


In France Groult was honored Officer of the Legion of Honour.