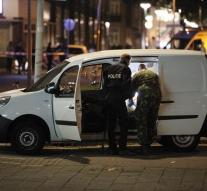 rotterdam - The Spanish driver of a bus arrested Wednesday night in connection with the terrorist threat in Rotterdam was too drunk to be able to hear immediately. The man first had to sleep his rust before the police could really feel him, says a police spokesman.

The man is still stuck for trial. Depending on the statement and the results of the investigation, it is likely to be decided on Thursday whether the man stays longer or released.

The driver was arrested when he was traveling around the Maassilo with his van, carrying gas bottles. At that moment a pop concert was blown out because information had come about a possible terrorist attack. He was put aside because of his driving style.

It may be that the man was in the wrong place at the wrong time, police say. Research and trial must provide complete assurance.

The Spaniard is a mechanic and needs gas bottles for his work.