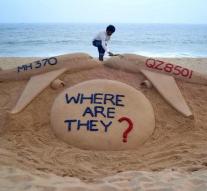 sydney - A wreck piece that washed up on the island of Mauritius has been a part of flight MH370, the plane disappeared from Malaysia Airlines. Which has declared the Australian government Friday.

It is a part of the left wing. is determined on the basis of serial numbers that it belonged to the device that disappeared in March 2014 during a night flight from Kuala Lumpur to Beijing. On board were 227 passengers and twelve crew members.

It is the third stranded wreck piece which is accepted as it is MH370. Other parts were discovered on the Tanzanian island of Pemba and the French island of Reunion, both for the east coast of Africa.