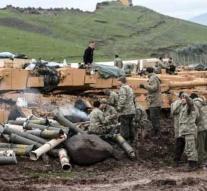 ankara - Because of a rocket shot from Syria, at least ten wounded have fallen in the Turkish town of Kilis. According to the Turkish news agency Dogan, the projectile was launched in the Afrin region where an operation of the Turkish army is in progress against Syrian Kurds.

The rocket hit a mosque in the center of Kilis border town. On Saturday, a Syrian died in the Turkish Reyhanli by a rocket from his homeland and 46 people were injured. In Kilis five wounded were previously attacked by a rocket.

Turkey started an offensive against the Syrian Kurds in the Afrin border region last weekend.