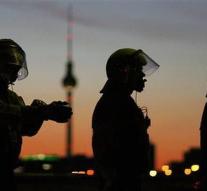 - A large protest against the eviction of a squat in Berlin Saturday night ended in violent clashes between demonstrators and police. In addition, 123 officers were injured and 86 demonstrators were arrested, police said Sunday. It was the most violent protest in the German capital at least five years.

did some 3,500 people participated in the demonstration in the district of Friedrichshain. The demonstration began peacefully but around 21. 30 hours hit the flash in the pan. The police, who were present en masse 1,800 runners from seven states, was pelted with stones, bottles and fireworks. Not only in Friedrichshain, but also cars were set on fire elsewhere in the capital.