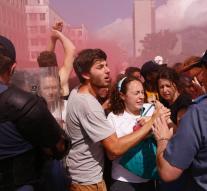 - A large group of students and riot police Wednesday for the South African parliament in Cape Town hit clashed. Students are furious over an announced increase in tuition fees. Also mixed opposition MPs joined in the fight, which left many injured.

Students protest across the country in a week against the planned increase. The riots led to the closure of all schools and colleges.

Blade Nzimande Minister of Education makes students Tuesday the proposal to raise tuition by 6 percent. The proposal was rejected because the inflation rate in September was only 4.6 percent. The original plan hurried even 10 percent more tuition.