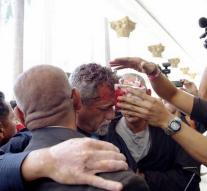 caracas - Venezuelan parliamentarians are robbed and abused by attackers who are supposed to be radical supporters of President Nicolás Maduro. The parliament building was stormed on Wednesday morning and only in the evening the conquered 350 parliamentarians and staff could go outside.

Venezuelan media report Thursday that twelve people have been injured. They met for a solemn celebration of independence declared on July 5, 1811. President Maduro has ordered an inquiry 'to the remarkable events. 'Minister of Defense Padrino López has strongly condemned the attack and called for political dialogue.

On Thursday, the opposition movement MUD (La Mesa de la Unidad Democrática) reopens the street to protest against the Maduro government lost the majority in parliament.