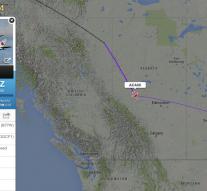 calgary - A Canadian aircraft on Wednesday because of heavy turbulence must make an emergency landing at the Calgary International Airport. According to Canadian authorities twenty people were injured. Canadian media reports said. The plane had taken off in China.

15. Around 15 pm Canadian time the plane landed safely in Calgary. A spokesman for the fire brigade were three fire trucks on site to retrieve the wounded from the unit. There were ambulances and police present. On the severity of injuries is still unknown.

The Boeing 777, with flight number 88, was en route from Shanghai to Toronto.