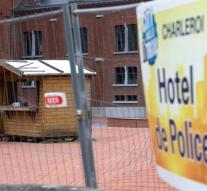 - The two policewomen who sat in the Walloon city of Charleroi have been beaten by a man with a machete, since Sunday night from their artificial coma. According to a source within the police is their condition stable.

The two women were placed in an artificial coma after the attack. The agent who is affected most seriously injured, has to undergo several surgeries on her face. The woman, named Hakima, managed to shoot twice towards the perpetrator according to a source.

Her colleague Corinne need surgery again. She previously transferred to another hospital.


The culprit, according to the Public Prosecutor a 33-year-old Algerian who was illegally in Belgium. A third policeman shot him down eventually. The attacker died in the hospital.